Population Growth and the Demographic Dividend 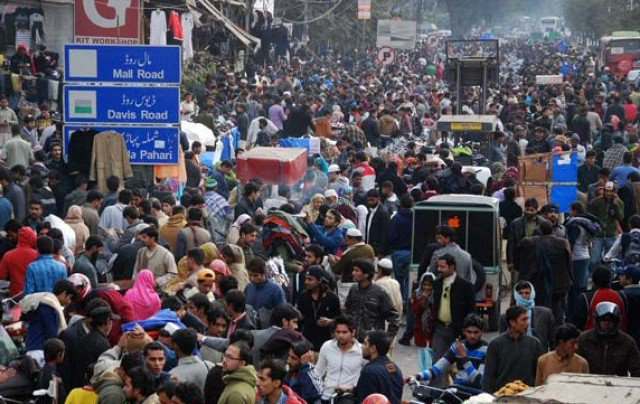 By Sharmin Arif and Rafay Afzal

Pakistan is a country with a population of 207 million people and a growth rate of 2.4%. However, keeping absolute numbers aside, a deeper look into the demographic structure of the population insinuates a potential economic challenge of an unprecedented scale.

The current population pyramid depicts an age structure with a growing dependency ratio in the presence of low income per capita. Pakistan is one of the youngest countries in the world, with more than 60% of the population under 30 with many needing jobs. Without the right government approach, this youth bulge is a ticking time bomb that can explode through spiralling incidents of wide scale impoverishment and social unrest. While a large youth cohort can be an asset as a young workforce and as a precursor to increased aggregate demand, lack of adequate employment opportunities along with low capital development can convert this economic boon into a bane.

United Nations World Population Prospects (2019) projects that Pakistan’s population  may reach 340 million by 2050 and 400 million by the end of the century. Several experts such as Population Council’s country director, Zeba Sathar, highlight how excessive demand stemming from unrestrained population growth can outpace the supply of essential resources in a major way. In that sense it shows the manifestation of the Malthusian pessimism in Pakistan.

The demographic transition — a change from high to low rates of mortality and fertility – strongly influences the trajectory of economic development. In the experience of developed countries in the West and East Asia, a decline in the fertility rate has been the catalyst for balancing out their demographic structure to maximise the working age segment and attain more evenly spread out economic benefits or in other words capture the demographic dividend. However, a missed opportunity can lead to a demographic disaster if the unemployed working age population become ‘forced dependents’ – a probable scenario for Pakistan.

A decline in mortality rate, ensuing from the advent of standard medical technologies and health investments in the country, is always followed by a decline in fertility rate. Even after mortality rates fall, the lag in reducing fertility rates can often range from 50 to 150 years as experienced in some countries. The reason for the longer transition from low mortality to low fertility rates have to do with endogenous factors including government-supported family planning, as well as the overall economic development of the country – without creation of jobs, the incentive to switch from having more children to supplying one’s labour in the economy is lost. Ultimately, without reducing fertility, the likelihood of the working-age population to grow faster than a country’s dependent population is slim thereby sustaining constricted per capita productive capacity of the economy.

Imposing higher costs on parents for raising children serves as a deterrent against having more children than the economy can sustainably accommodate. Through state regulation and investment in creating an equitable job market, parents can be incentivized to invest in their children’s education, health, and life skills preparing them to participate in the economy and beginning the virtuous cycle of demographic transition, i.e. rapid and sustained economic growth with a sustained decline in the dependency ratio due to fertility decline.

The demographic transition unfolds in four stages, beginning with stage one consisting of high death and birth rates, followed by stage two categorized by a drop in the death rate but not followed by a decline in birth rates. Since 1998, Pakistan has been in the third stage of the demographic transition whereby birth rates have fallen as a result of contraceptive awareness, wage increases and urbanization, but not made headway in further reducing fertility rates to reach stage four, where birth rates are equal to death rates i.e. the replacement level fertility rate. The current population growth rate of 2.4% is unsustainable despite a decline from 3.1% prior to 1998 to 2.6% in 1998. If Pakistan does not equate its birth rate and death rate by 2045 – requiring a total fertility rate (TFR) of 2.1 – it’s productive population will be sandwiched between an ageing and an adolescent population, both segments dependent on the smaller productive population segment. This entails parents to conceive on average no more than 2.1 children.

The government has been taking proactive steps to control population growth through multiple ways:

In Punjab, the Punjab Population Innovation Fund (PPIF), a non-profit, public sector company, is complementing government efforts by supporting interventions for the reduction of fertility rates in the remotest areas of Punjab. Their target is to increase access to contraceptives. They have liaised with the country’s largest social protection program, Benazir Income Support Group (BISP), for improved population planning.

The World Bank predicts Pakistan needs at least 1.5 million jobs annually to maintain the current unemployment rate. However, 2020’s projected GDP growth rate of 2.4% (now having fallen even further during the covid outbreak) is insufficient to absorb new entrants into the labour force – a GDP growth rate of at least 7 to 8% is required for that. With an extremely compromised social protection system and limited fiscal space, the strain on Pakistan’s resources is stretching far beyond comfortable levels.

However, a push towards elevating the literacy, skills and education levels of the masses can lead to reducing the burden of dependents on the state by delaying early marriages which in time can help reduce fertility rates and make it easier for the state to accommodate new entrants to the job market. However, the creation of new jobs should in part be driven by young entrepreneurs generating economic activity – this is especially useful in high-value added sectors such as the manufacturing sector which employs the majority of the country’s workforce. Increased spending on education along with more investment in high-value added sectors must be urgently ramped up.

The process can be sped up by bringing technical and vocational training institutes at the forefront of imparting employable skills. The demographic transition relies on a shift from supply-driven to demand-driven skills provided by skills training providers, such as Technical Education & Vocational Training Authority (TEVTA), aiming to increase the likelihood of gainful employment by job aspirants. As such, skills curricula should be formulated with the help of leading industries. Organisations such as Punjab Skills Development Fund (PSDF) help support this objective through trainings aligned to expectations of the job market.

Only by absorbing the youth bulge into the economy through education and employment, can they be productively engaged and become empowered to unlock the demographic dividend.

The challenges posed by rapid population growth cannot be addressed solely by the government – support from the private sector and civil society-led initiatives are crucial. Provincial Departments of population welfare need support from other departments such as Health, Education and Women Development while also coordinating with Federal Departments relating to data collection and financial inclusion. The aim should be to singularly address with consensus, through their separate platforms, the need to slow down the fertility rate. Such a system of coordination across multiple sectors both inside and outside the government entails institutionalising a multi-sectoral approach, spanning beyond government tenures to ensure meeting pre-defined targets for achieving optimal population outcomes. This is crucial because, in the past, civil and military governments repeatedly injected their separate ideologies for structuring the society to fit their own political interests thereby affecting the priority given to demographic transition and stalling progress.

Coordination between the provinces and the centre is also paramount. After the 18th Amendment, population welfare – among many other subjects such as health and education – was devolved to the provinces. Currently, provinces receive on-going funds toward population welfare initiatives, however, unreliable data sets remain a key impediment in accurately designing policy to this end. Furthermore, after the seventh National Finance Commission (NFC) Award (2010) provinces have little incentive to practice population control as 82% of resource allocation to the provinces out of the divisible pool (of which 57.5% goes to the provinces) is on the basis of population. Reframing provincial incentives to bring urgency in population planning is important.

Social impediments against population control abound as well. Religious and cultural resistance to the concept of population control coupled with staggered political will makes reform challenging. National dialogue on population growth to bring every stakeholder on-board is much needed. The Council of Common Interests (CCI) and the Council of Islamic Ideology (CII) are two constitutional bodies which can spearhead a national consensus on population growth and the demographic dividend. With the right mind-set Pakistan can defuse the population bomb and prove Malthus wrong.

This article has drawn on knowledge from experts at a panel talk organised by CDPR: https://www.youtube.com/watch?v=57hVIMmB0y4