How much are farmers losing from inefficient irrigation? 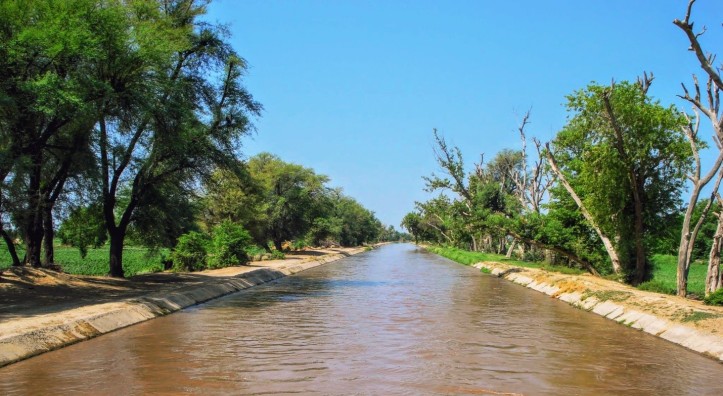 How inefficient is Pakistan’s water irrigation system? If you were to use traditional methods to measure that problem, you would find no issues with water allocation. But in recent research I conducted with Robert Mendelsohn,[1] we used more precise measures and found that farmers lose 13 percent of potential net revenue because of inefficiency in irrigation water allocation.[2] This has important policy implications for maximizing the value of Pakistan’s canal irrigation networks.

The bulk of the canal system in present-day Pakistan was originally built by the British colonial administration and land irrigated by these irrigation canals was originally allocated in the late 19th Century.[3] The canal system has a three-level design – primary, secondary, and tertiary canals (Figure 1). A primary canal is a major trunk from which secondary canals are branched. Tertiary canals branch off from secondary canals and are the level at which farmers withdraw water into their farmland.

A simplified schematic of the Hakra Branch Canal, with its three levels of canals: primary, secondary, and tertiary.

The system of water allocation at the farm level is called warabandi, which literally translates as “turns” (wahr) which are fixed (bandi). Each farmer gets a fixed time each cycle where they can open the gate to their farm and tap the water flowing in the tertiary canal.[4]

The canal in our study – the Hakra Branch Canal – is part of the Indus Basin Irrigation System (IBIS) in Pakistan. IBIS is a continuous-flow, fixed-rotation system with two major multi-purpose storage reservoirs, 45 major irrigation canal commands, and over 120,000 watercourses delivering water to farms.[5]

The difficulty of knowing the allocative inefficiency of irrigation water

Water allocation models throughout the world offer a common insight on what constitutes efficiency: If the value generated by an additional unit of water consumed is equal for all users within a basin, society can maximize the value of its water supply (in other words, the marginal value of water must be equated across users). [6] This basic insight applies to water allocations across farmers within a canal irrigation system as well.

For a long time, we did not know if Pakistan’s canal system lived up to this model because of poor data: Traditional surveys of agricultural production omit important farmer water consumption data. While traditional surveys often tell us how many irrigations farmers make, the amount of water per irrigation is often assumed to be the same across farmers or is measured crudely. For example, rather than measure it, farmers are asked the perceived depth of each irrigation they apply on their farms. This is a problematic measurement, partly because fields are not perfectly level so that depth would depend on where the farmer made their estimate of applied depth. And while there is every reason to believe that both the number of turns and the length of each turn may be the same along the canal, it is not clear whether the flow is the same at each farm-gate. Thus, it is very likely that these traditional measures are not accurate.

What we did differently

Through better measurement, we provide a more accurate calculation of water use within canals, allowing us to rigorously demonstrate the inefficiency of irrigation water allocation and quantify the loss. Specifically, we coupled in-season water measurement with a post-season production survey.

We collected actual physical measurements of surface water from a sample of farms spread across the Hakra Branch Canal. The canal water discharge was measured using a flow meter and standard stream measurement protocols during the 2012 summer growing season. GPS tracking captured the precise location of the measurements made along the canal system, making it possible to calculate the distance from the head of the canal system to the measurement sites along with expected conveyance losses. These in-season water measurements were followed by a full agricultural production survey of the farmers at each canal location once the summer growing season was over.

Armed with better measurements of water delivered to farmers, we could determine the efficiency of water allocation by testing whether the value of each additional unit of water consumed was equal across farmers.

We found that farmers who use more water (located at the head and middle of the canal) receive less value for each additional unit of water they consume (Figure 2). The marginal value of water is much higher for farmers at the tail of the canal.  This suggests that the allocation of water is inefficient. If some water could be reallocated from head to tail farmers, water would move from lower to higher value use and the canal would generate more net revenue.

Using these estimates, we calculate how much farmers would gain financially if water allocation was optimized, meaning surface water supply for all farmers was made equal. We found a potential 13 percent increase in farmer revenues from reallocation.

For comparison, we used traditional, less accurate measurements from the farmer agricultural production survey and found no difference in water allocations within the canal. We also found that traditional measures of water consumed could not predict net revenues for our sample of farmers. If relied on, traditional measures of water use lead us to incorrectly conclude that water allocation within the canal network is efficient, that there is no allocative problem.

That there is a substantial 13 percent welfare gain from reallocation makes a strong case for moving toward some kind of water trading system. Pakistan’s irrigation sector has, in the past, seen attempts at introducing an irrigation water market, but with little success. However, this doesn’t mean we shouldn’t keep trying. As I argue in other work[7], a water market is physically feasible in Pakistan’s irrigation system.

Moving toward a market-based trading system will require political will and a lot of time. There is institutional inertia and those responsible for the large and complex canal infrastructure cannot be expected to move toward a market-based trading system overnight. But certainly, small steps toward this goal can and must be taken – a lot of value is being lost to misallocation.

The first step toward a water market would likely entail better measurement. Irrigation water is incredibly valuable (as we show), yet the existing canal measurement system is unable to specify the amount that a farmer receives (like a utility that has no sense of what each customer is consuming). The institutional machinery for measurement work exists – every length of a secondary canal has an officer assigned to it. Moreover, the physical hardware to measure flow is relatively low-cost and easy to maintain. Therefore, a first step in moving toward better allocation could involve generating finer, farmer-level water data.

Agha Ali Akram is a visiting fellow at Yale University.