Now that provinces have more control over taxes, do they collect more revenue?

The 18th Amendment to the Constitution and the 7th National Finance Commission (NFC) award supporting it give the provinces greater control over their fiscal affairs, but has that increased revenue collection? This post compares how Sindh, Punjab, and Khyber Pakhtunkhwa (KP) have raised tax revenue following devolution.

Pakistan’s tax-to-GDP ratio in 2016 stood at 12 percent. According to a recent paper by the IMF, this represents an encouraging increase over the previous three years. As good as that sounds, Pakistan still lags behind other emerging market economies in terms of tax to GDP ratio.[1] Poor tax collection by provinces is an important factor in Pakistan’s overall unsatisfactory tax effort.

The provinces can collect taxes on agriculture, property, automobiles, services, and stamps. However, they continue to depend largely on transfers from the federal government. Based on revised budget estimates for fiscal year (FY) 2015-16, federal tax receipts accounted for 76 percent of the total general revenue in Sindh, 78 percent in Punjab and a staggering 92 percent in KP. Of the total tax revenue in Pakistan, provincial tax collection only accounted for 7.7 percent in 2016 – a meager 0.3 percent of Pakistan’s GDP. This is partially explained by the fact that the two most buoyant avenues of taxation – income tax and general sales tax (GST) on goods – remain with the federal government.

While it appears that devolution has galvanized the provinces to promote social sector development, like in health and education, the increased share of the provinces in the NFC award (as a step towards fiscal decentralization) seems to have limited the incentive of provinces to increase their own revenue generation, since they now receive more funds from the federal government. So what exactly is happening with provincial tax levels since devolution?

Figure 1 below shows the provincial revenue trend for the three provinces starting from FY 2010-11 (the year devolution occurred), till FY 2014-2015, for which the latest actual figures are available. 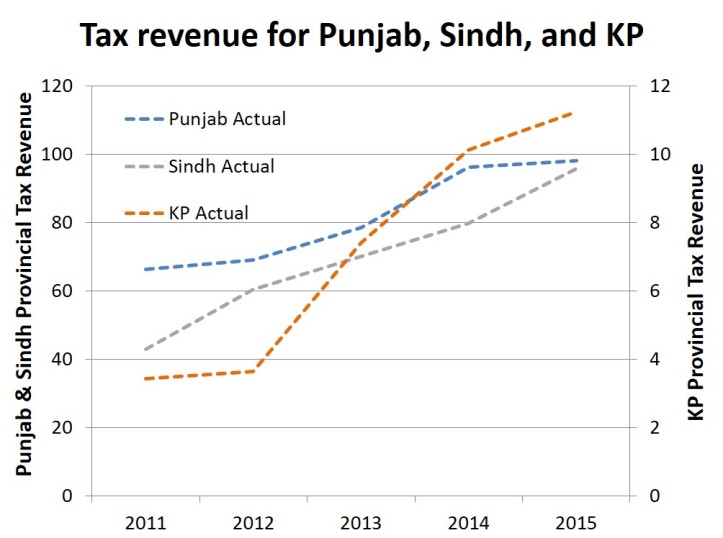 In FY 2010-11 Punjab managed to collect about PKR 66 billion in provincial taxes while for the same period Sindh collected PKR 42 billion.  The KP government at the time, led by the Awami National Party (ANP), only managed about PKR 3.5 billion. Such low numbers can partly be explained by a two-year tax exemption given by the KP government because of the negative impact of militancy and floods on the business community of KP.

Remarkably, in comparison, Sindh increased its provincial tax revenue to about PKR 96 billion by 2015, a 126 percent increase. However, as explained later, this was primarily achieved through a special tax on imports levied by the Sindh government. On the other hand, KP under Pakistan Tehreek-e-Insaaf (PTI) has been able to take provincial tax receipts to a little over PKR 11 billion by 2015, a 228 percent increase. The big jump came in 2012-13 when provincial tax revenue almost doubled from PKR 3.6 billion in the previous year to PKR 7.4 billion primarily as a result of ending the tax break given two years ago. This was in the ANP government’s last year in office. PTI in its first full year continued with this sharp increase, taking provincial tax revenue to a little over PKR 10 billion. However, between 2014 and 2015 there was a moderate increase of slightly more than PKR 1 billion. Overall, KP still lags behind in revenue collection and continues to depend more heavily on federal transfers compared to the other two provinces.

Similar to KP and Punjab, in Sindh GST on services is the largest contributor to provincial tax, contributing about 52 percent. However, the Sindh government, taking advantage of being Pakistan’s main port of entry for goods, charges a Sindh Development and Maintenance of Infra-Structure cess on imports coming into Sindh by air or sea. Its contribution is another 26 percent to the province’s tax revenue in 2015. Other provinces have raised concerns over this form of taxation pointing towards Sindh taxing goods that are meant for other provinces. The share of tax from agriculture is even lower in comparison to the other two provinces; it stands at a mere 0.3 percent of the total tax revenue.

Contrary to popular belief, the absolute Rupee value of tax collection by the provinces actually increased in recent years. However, the provinces still only contribute less than 8 percent of all tax revenue. This means there is still a lot of room for all three provinces to improve their tax collection. However, care must be taken not to implement taxes that distort the cost structure of firms (as in the case of Sindh’s cess, and the provincial tax on internet services) and are growth inhibiting and/or increase the burden of income taxation on those who already pay taxes (as in the case of Punjab’s tax on some services). While improving their tax effort, provinces must also avoid taxes that are regressive, as seen in the tax on cellular phone services.

Ghazan Jamal is a Pakistan Country Economist at the International Growth Centre.